Three CSE beach nourishment projects were completed in record time between April 1st and July 31st. Thanks to cooperating weather, efficient contractors, and timely decisions by state and federal regulators, visitors to Edisto Beach, Hunting Island, and Kiawah Island will enjoy wider beaches for the remainder of the season. 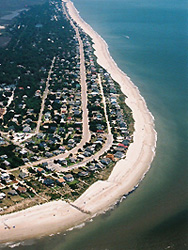 Edisto Beach was nourished between 2 April and 11 May. Great Lakes Dredge & Dock Company (GLD&D) (using the dredge Illinois) pumped 875,000 cubic yards (cy) of sand from an offshore shoal to the oceanfront. Nearly 3.5 miles of shoreline were widened by an average of about 75 feet (ft). This was Edisto’s largest-ever nourishment project and more than five times the size of the last project in 1995. 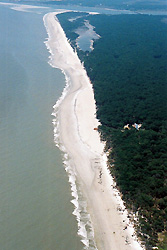 Beach nourishment at nearby Hunting Island was completed between 20 May and 12 June. GLD&D moved their equipment across St Helena Sound and pumped 570,000 cy of sand from a borrow area two miles offshore. This year’s project was Hunting Island’s eighth nourishment since 1968 and will prepare the beach for groin construction. Federal and state agencies granted a time extension on their permits so that work could be accomplished in a timely manner at lower cost while the dredge Illinois was “in the neighborhood.” 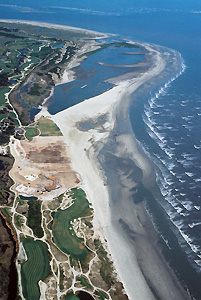 CSE’s third project of the season was at the eastern end of Kiawah Island. L Dean Weaver Construction Company moved 550,000 cy of sand by trucks and restored a one-mile section of beach along the famed Ocean Course. This area had eroded over 400 ft in the past five years because of a shoal-bypassing event. Work on this project was timed around the arrival of piping plovers that inhabit the area. Sand hauling began 8 June and was completed on 26 July.