Isle of Palms is a 7-mile long, 1-mile wide barrier island off South Carolina’s coast in Charleston County. It is a blend of almost 5,000 fulltime residents, and 20,000 to 50,000 investment owners and visitors. The Wild Dunes Resort occupies 1,500 acres on the northeast end of the island, which includes two 18-hole Fazio golf courses. 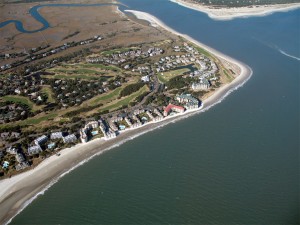 Isle of Palms – before nourishment

CSE was hired to design and implement a beach restoration project for this end of the Isle of Palms, including a systematic and thorough removal of all sand bags in the project area. The plan called for placement of up to 885,000 cubic yards of beach quality sand via hydraulic dredge, and removal of some 9,000 sand bags. Weeks Marine, Inc. was contracted for the dredging, and a subcontractor removed the emergency sandbags in close coordination with the nourishment.

The window of time permitted for the project was May 15, 2008 through July 31, 2008. Weeks Marine mobilized and began work on May 15th. The dredging operation ran 24-hour, 7 days a week, with sand bag removal running simultaneously roughly 9 hours a day for 6 days a week. Fork lifts and bobcats were on the beach lifting and disposing of sand bags, as staff slit and analyzed each bag’s content for appropriate disposal. Offshore, Weeks’ hydraulic dredge, the R.S. Weeks, pumped beach-quality sand from pre-approved borrow areas through 30-inch pipelines onto the shore, ultimately covering 10,200 linear feet of beach. All permit requirements for environmental concerns were met, with certified turtle teams monitoring the beach daily and successfully relocating 3 turtle nests during the project time frame.

Isle of Palms – after nourishment

Weather conditions during the project period were ideal, with no major delays interrupting either offshore or onshore operations. One minor delay did occur, however, when a loud rattling noise in the dredge pipe preceeded discharge of a ten-inch cannonball onto the new beach. CSE’s on site staff cleared the area and notified emergency and state officials. A state historian identified the cannonball as a Civil War munition that had been resting on the ocean floor for over 100 years. It was initially transported to Fort Sumter for cleaning and preparation for final transport to the SC Historic Preservation Office.