Kiawah spit, at the downcoast end of Kiawah Island (SC), is notoriously unstable and has breached many times over the past 500 years.  An ample supply of sand from upcoast causes spit growth and accounts for westerly migration of adjacent Captain Sams Inlet.  As the inlet migrates, it cuts into Seabrook Island and interrupts the normal flow of sand along the beach.

Once the history of the inlet was understood, CSE researchers and others proposed periodic relocation of the channel to an upcoast position across the spit.  The basic premise was to control the timing of spit breaches and free up sand trapped in the abandoned tidal delta.  With a new channel in place and the prior channel closed, wave action was expected to push sand onto the downcoast beach and provide sustained restoration.

Relocation of Captain Sams Inlet has been accomplished three times since 1983 with obvious success (see cover photos in link to CSE’s Coastal Erosion Primer).  However, prior to the third relocation in 2015, several potential impact questions were raised by regulatory agencies and concerned parties:

1)    Would inlet relocation cause accelerated erosion along the updrift beach?

2)    Would the project modify tidal flows behind the spit in Kiawah River?

3)    Would other parts of the spit be more vulnerable to storm tides and breaching after inlet relocation?

CSE developed a sediment budget using nearly 30 years of profile surveys along Kiawah Island and confirmed the historical growth of the shoreline and likelihood of continued accretion along the oceanfront.  The hydraulics of Kiawah River behind the spit were analyzed using the widely applied computer model, RMA2 (US Army Corps of Engineers).  CSE surveyed the river in detail to produce an accurate model grid, then simulated flows under a range of conditions with and without inlet relocation.  The results confirmed there would only be incremental increases in peak velocities (order of 0.02–0.05 feet per second–fps) for the relocated inlet condition. 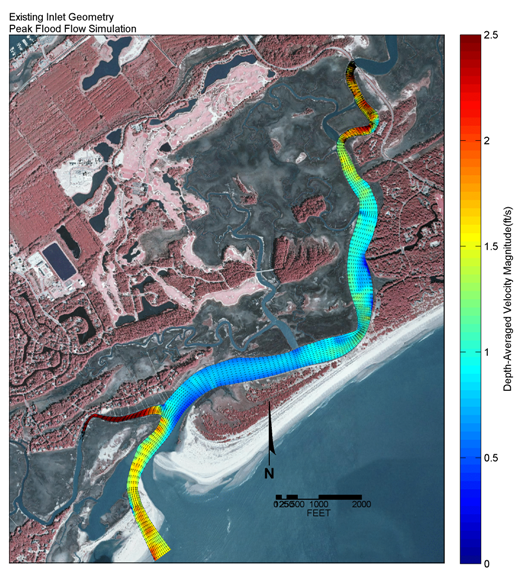 Modeling also demonstrated that river flows were accelerating at the neck of the spit because of marsh growth on the opposite side of the channel.  Model simulations showed that strategic excavations of the marsh “point bar” could significantly reduce peak velocities by 0.5–0.7 fps and thereby reduce the erosion pressure at the narrowest part of the spit.  This demonstrated to resource and regulatory agencies that channel narrowing by marsh growth at the neck of the spit was the principal erosion factor of concern.  Relocation of Captain Sams Inlet was permitted with support from the owner of the spit. 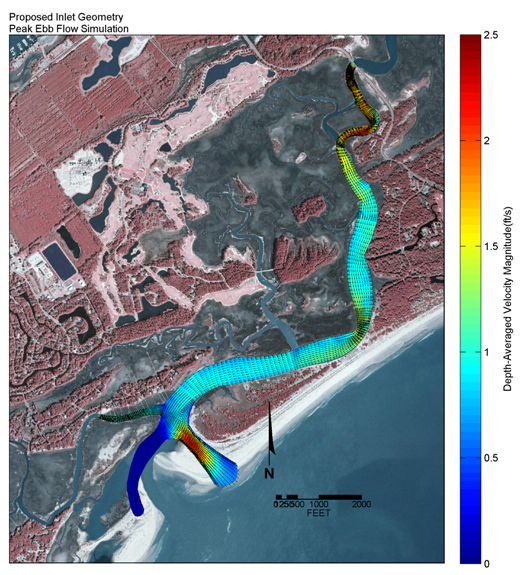 Others have developed plans to armor a section of Kiawah River shoreline where the spit is most vulnerable to breaching.  CSE’s hydraulic studies suggest that strategic marsh excavations could also provide sustainable erosion relief along the spit and help preserve a soft edge.  While marsh dredging should not be permitted in most areas, it is a less impactful alternative in the Kiawah–Seabrook area because of natural gains in marsh area over the past 30 years.  CSE’s inlet relocation projects have expanded sheltered, intertidal areas creating conditions for natural growth of salt marsh.

CSE’s Kiawah River hydraulic study illustrates the comprehensive, multidisciplinary approach that we bring to our coastal erosion studies.  Modification of the coastal zone by inlet relocation, construction of jetties, or beach nourishment potentially impact areas well removed from the project site.  CSE uses long-term survey data, computer models, and empirical measurements to evaluate impacts and predict outcomes.  A key aspect of our Captain Sams Inlet–Kiawah River hydraulic study was our extensive, historical database for the area, which insured that the model results were interpreted accurately in the context of historical changes at the project site.